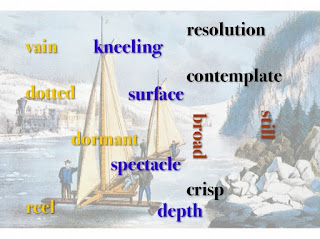 vain, dotted, dormant, reel, kneeling, surface, still
spectacle, depth, resolution, contemplate, broad, crisp
1- IN THE VAIN
In The Vain,  dotted with dormant putrification of consequential action sprung to pustulating spectacle - they, the legions  of crisp charred flesh,  reel, exposed in true burned bare form - kneeling on the surface of the broad road - the stench of careless flung hatred, scorn, vapid lethal indifference, the depth of their former indifference powerless as a bubble on the air -  now they stare at the ruin of idled hands and contemplate in ribbons of finally felt pain their resolution to do better, oh so far better, in the future of a never promised tomorrow.

on the dotted rug
to contemplate your broad face
check resolution
in the mirrored floor
gauging depth of expected
reel. Crisp you rise
3- DRAINED OF VAIN
On the still lake there at the edge she stands
Watching the v dotted flight of Canada geese
As all senses coalesce tumbling on the verge
of reel force her gently unfolding down drained of vain
To kneeling on the surface of the spectacle of
The depth of life sweeping through the crisp new
Morning air its depth too chasmic to contemplate
Despite her broad intention as she walked bare footed
Chilled in her dotted night dress to contemplate
On the still lake