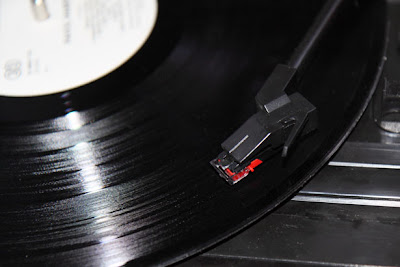 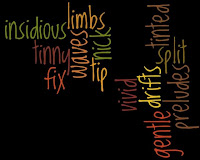 The Preludes were playing,
on the Victrola in the living room.  The rising notes
rolled on drifts of hot summer filling the room as she sat on the edge of Mama's bed,
playing with the tip of her pointer finger as Mama did something with the hot iron,
flicking a wrist over and over to fix those tiny tinted waves in her hair that Mama'd
lied about and told the grocery boy were 'natural as the sea tide,'

The Preludes were almost through playing,
as Mama finished up with gentle tissue kisses from her crimson shiny lips and stood
sighing back looking at a split in her stockings right there near her ankle and
quietly walked fast through the sound and straight for and out the front door.
If  she hadn't stopped day-dreaming and gotten up and run down the hall,
as grandma would say in the "Nick of time" she would have missed
Mama skipping sideways down the skinny front path into a car
waiting and missed Mama laughing loud and long melting in the summer night into
a man's matching laugh and everything getting lost in the engine growling, as soon as Mama shut the door and she would have never seen the car quick roar away, tail-lights shimmying down and off the street before she could even wave.

The Preludes were finished
when she went back in
the living room was quiet except for the scratchy sound of the Victrola and Grandma's steady snores on the couch for company, where she cuddled up into Grandma's soft side and snuggled into a doughy Grandma arm same as a feather pillow except that it curved around to embrace her, knowing
she was there even from the depths of a splay-legged summer heated sleep.
And then it was quiet.
Just both of them breathing another night together
as the Victrola clicked off
automatically.