Preludes to The Short Lived Tale of Sea-Going Link 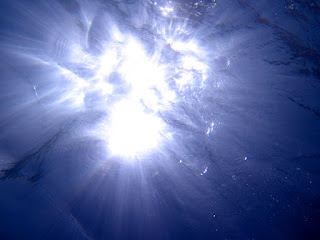 Father was a sailing man with large beefy hands
and a vivid florid face filled with sunlight and salt spray
Mother was a fairie sprite floating his
ale one night on drifts of dandelion fluff
blown through the opening and shutting door
Dancing in the rose tinted light
He heard her tinny, tiny voice, laid his index finger as a split log on the polished bar and watched as she lit on the tip to fix her gossamered wings  –

Father watched in wonder, mesmerized by her perfect limbs folded
on the half moon of his fingernail
Closed his eyes to sigh and
Woke ecstatically entwined for one slivered shimmering second
Before wakedness insidious as snake slither split his eyelids and
Sitting bolt upright on his feather-bed he stared at
a fine spray of glitter – sparkling in a tiny rumpled crease on his pillow case –
as memory of her gentle touch, their soaring coupling poured through his blood
encircling his heart piercing his center with a silvered nick more real than any dream or drunkard fantasy could ever be.

( this was the first tale of Link which ended his life)


A Tale From the Marrow
introducing the short-lived Link
In the evening in the Marrow a smallish Link sails into a sunlit puddle behind the shuttered sail-shop seeking a teeny store of sail. The Link arduously tosses his anchor, stills the wee wake he has had to navigate and standing upon the deck calls in a stern tinny voice over the rail “Oh ye Lord Of Marrow” why have ye
abandoned your faithful Link to pitch sail alone?”
In the morning of the Marrow the shopkeeper stops to open his backdoor and steps unseeing crushing the teeny empty bottle of port on the deck of the
decimated boat on the bottom on his shoe – only one miniature almost invisible
rail remains, sticks in a crevice of his shoe and clicks softly on the tiled floor as
he opens his sunny shop unaware of the tragedy that he has traversed and
unwittingly trails.