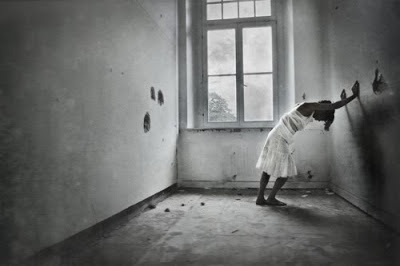 Finally it was morning.  Finally.  She had met him at the BookStore, the on-campus bar that was the shared joke among the students.  That night was no different, she supposed from others, although Becca had spent most of this first month away at the actual book-store or in the library.  He had a nice smile and soft brown eyes and the music was loud, and the place smelled of what she supposed was beer, a warm yeasty, uriney odor.  Over the music she heard a girl laughing "Yeah I told my parents I was at the bookstore too."  Maybe it was just her, maybe she was just too serious, but the joke didn't seem all that funny, the music was too loud to enjoy and that smell.  Well, she could tell herself that she had done it, she had gone to a bar and met a guy and so when the boy with the nice smile and soft brown eyes leaned over she smiled back at him.  She had promised herself she was going to have this night - just so she could be able to say the next time she turned down going that "YES" she had actually gone.  And when he asked, well actually yelled over the music and the general shouting "Do you want to get out of here?" well, she did.  It was October and a little chilly - they walked through the campus toward her dorm and he asked her if she wanted to go somewhere and have some coffee, and the lights were shining on the lawn, and glowing on the cobble stones leading to her dorm and the Student Center was shining straight ahead and wasn't this all part of it?  Going to a boy's place and having coffee.  They had been talking about Contemporary Poetry, he was a TA for the same professor in a different section.  It would be one of those memories that she would collect and pull out when she was much older from her college days section.  "Yes" she had said, and he took her hand.  It was going to be a great memory.  She could almost taste the coffee feel, the heavy mug he would have in his apartment just on the edge of campus, and if the building when they got to it looked a little dark, that was the way a graduate student's apartment should look, wasn't it?   It was going to be a great memory. She was still thinking this in some sort of stunned deluded shock as he opened a door to an empty room and pinned her against the wall - the only sound the ripping of her shirt.  And for some reason, through most of all that followed through that long, long, cold, pain filled night, even when she curled on the floor and he in some sort of sudden rage kicked the wall leaving footprints - she kept thinking that she could smell coffee brewing - somewhere.
Posted by Dr. Pearl Ketover Prilik (PKP) at 2:32 PM