A Writer Admired:Dr. Seuss – Theodor Seuss Giesel – father of Horton who I heard * 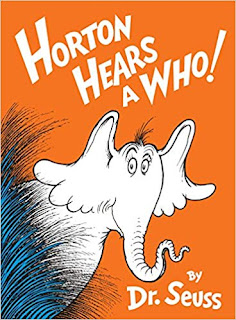 Dr. Seuss – Theodor Seuss Giesel – father of Horton who I heard *
long ago lived the small me
big eyed and quite serious
some said an “old soul” a
little mysterious ….
Questioning rabbis, teachers,
father and mother – questions
‘bout G-d and country and why
some people did what they did
to each other. Up late at night
watching dark curtains sway
unable to sleep, or even to pray
Even grandparents and elders
never knew what to say – when
I simply asked them why some
people treated others in a horrible
way – I’d seen pictures of piles of
childrens’ ripped away shoes, was
more than enough to give a small
child the blues – I continued to
ask all I could find – the strangest
thing was that most grownups did
very much mind – did mind that I
knew and questioned about things
not so cheery- they looked back at
my big eyes awaiting with looks that
were, well, yes, I’d say leery –
Leery of what? I wondered
about that too -! for I only wanted
to know what, what could I possibly do –
But, they shied away from my questions
told me to go out and play – when all
along I knew they did not know what
to say – and there were other things too
not just this old war stuff from back then
the way some people were treated it looked
like it could start up again – I stopped asking
so much and read and read more – even found
uncle’s book on a doctor Sigmund when I opened
his door – but it wasn’t until I found a big picture
book by another Doctor that I stopped and gulped
and took in a big look!!!
For there in of all places in this “childrens’” book
there it was! not the answer for don’t but the guideline for does!
Right there in sweet rhymes –
an elephantos whale of a tale – of how all could be set
right going forward marching on out there into our future times –
A tale of morality, persistence and kind
A tale of empathy, passion, courage and of so much
more – a tale of standing up for what one believes
one must stand up and fight for –
and there in the words was the
validation I sought – that view of the world as I thought
it could be ‘ought’ – the ache that I felt could vanish if all
just accepted and lived the sweet credo that a
“person’s a person no matter how small”

* inspired by prompt at Poetic Asides to use a writer's name as title of poem - on re-reading this lovely book - it occurred to me, given our turbulent times then and NOW, why this book moved me so profoundly.
Posted by Dr. Pearl Ketover Prilik (PKP) at 6:57 PM